On April 22, 2015, Apostolic Christian Rev. Lee Stoneking delivered his powerful testimony to the General Assembly of the United Nations in New York City about how God restored his life after he was clinically dead for 45 minutes.

Read the full transcript of his address below.

I want to thank the President of this General Assembly, the Secretary General of United Nations, and the High Representative for the Alliance of Civilization for your leadership and convening this high level thematic debate on a very important agenda item. Thank you.

You are looking at a miracle. By all medical expertise, I’m not supposed to be alive. 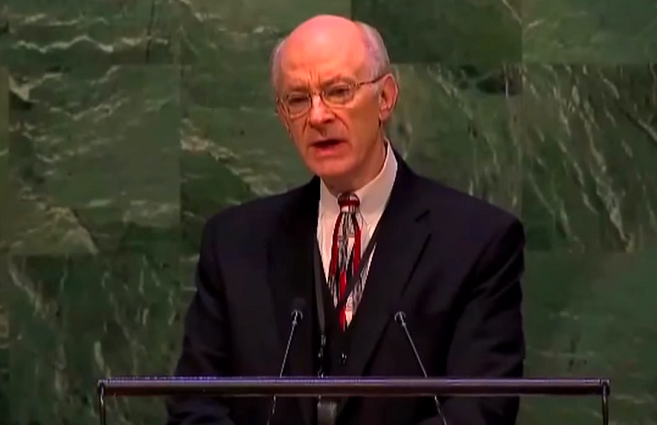 They took my body and put it on a stretcher and carried it to an ambulance. And the paperwork had been finished and it was DOA: Dead on Arrival at the hospital. But in the ambulance, on the way to the hospital, when all that medical science knew to do, and with all that was at their disposal to administer, they did not work. But in the ambulance, just a corpse lying on that stretcher, Jesus stepped on board that ambulance and my heart began to beat and the breath came back. The driver was startled. The paramedic was startled. He told me later, he said, “I have never seen anyone recover from what has happened to you.”

This all happened November 12, 2003. After several weeks in Australia, I returned to United States, to my home, by myself because I was totally healed. In 2004, I went to a hospital in Jackson, Tennessee for just a major checkup and they gave me a complete blood lipid profile. Triglycerides, LDLs, HDLs, cholesterol, et cetera. In a couple of weeks I went back for the results and when I walked in the doctor looked at me and he said, “Your results are absolutely excellent.” He said, “But Reverend, we now can check the DNA in a person’s body. We decided to check your DNA.” He said, “When we checked your DNA,” he said, “when God raised you miraculously from the dead, He removed the APOE genote, genetic marker for heart disease, out of every cell in your body.” He said, “That is impossible. It’s impossible.” He said, “Only God could do such a thing.” He said, “When God healed you and raised you up, He totally, miraculously healed you.”

So I am grateful today to be alive because we know, having been clinically dead for forty-five minutes with no breath and no heartbeat, I asked the paramedic later, I said, “Nigel, what happened when you shocked my heart?” He said, “It would beat three or four times and it would stop.” We know that after six minutes or less, with no oxygen to the brain, there is irreparable brain damage. But God has totally raised me from the dead. Finally, a doctor looked at me and he said, “You have defied all the laws of medical science.” I looked at him and I said, “I didn’t, but I know the One who did. His name is Jesus.”

I am an Apostolic Christian and my message here to you today is this: in the New Testament, in the Book of Acts, chapter 2 and verse 38, it says, “Repent and be baptized every one of you in the name of Jesus Christ for the remission of your sins, and you shall receive the gift of the Holy Ghost.”

The answer, Your Excellencies, to the violence in our day and to the human atrocities in our day, is Jesus. He is the Prince of Peace. I give you Jesus. God bless you.

A Cape Girardeau, Missouri family is now giving God praise after their 3-year-old daughter whose heart stopped beating for 12 minutes after she drowned in a pool during a party eventually came back to life and then went on to make a full recovery after countless prayers and a short hospital stay and they are calling it a miracle. […]