Nearly three years ago, Tampa Bay Buccaneers quarterback Jameis Winston, faced down lawsuits accusing him of rape. A year before that, he was in the news for shoplifting. Today, thanks to his faith, new family and football, the former Heisman Trophy winner is striking a more positive image at 25.

“It’s just been a blessing. I recently got engaged. Had my first son. And it kind of overshadows…once I had my son, it kind of gave me a new perspective on life because his birth, really overshadowed all the good and the bad,” Winston told Jason Romano in a recent interview on the Sports Spectrum podcast.

“When I look at that boy, my son, he’s eight months now, when I look at him, I just see that he can’t love me back, but I love him with all my heart and it just gives me so much respect for my fiancée and I see the way she treats him and it just gave me a whole new perspective of love and it transitioned my walk from just knowing about the Word to actually living by the Word,” he said.

Winston was disciplined by Florida State University officials for stealing $32 worth of crab legs while in the spring of 2014 and was suspended for a game in the 2014 season after he shouted a lewd phrase in the student union. He also maintained the rape allegation stemmed from a consensual sexual encounter. The lawsuits stemming from the allegation were settled in 2016.

Now in his fifth-year year as an NFL Winston insists that he has grown spiritually and has been shaped into a different person with his eight-month old son and fiancée, Breion Allen, by his side.

He explained that while he was raised in the church, it wasn’t until the fall of 2014 that he became a born-again Christian and started making the shift to live a better life.

“Well, traditionally, how I grew up, I grew up in the Baptist Church, always going to church every Sunday, Sunday school, vacation Bible school. Did everything. Just being around my grandmother. My mother was the youngest of 11 kids and I grew up in her family’s household. I was blessed to have my dad in my life and his family lived right down the street from the church. I just kind of grew up in that traditional faith,” he told Romano. 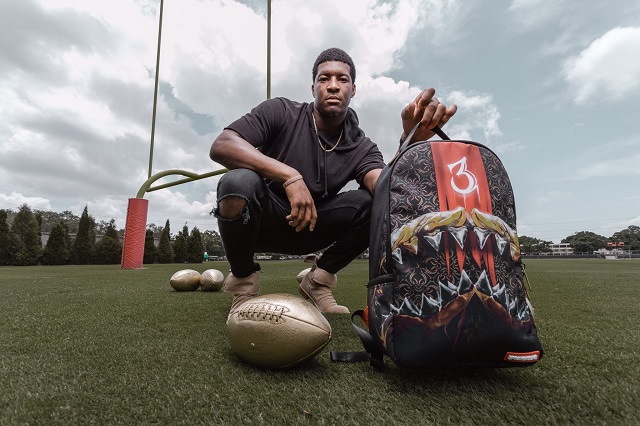 “I knew I was saved by Jesus Christ and I knew who my Lord and Savior was. I knew basically all the stories, you know, Jonah and the Whale and Moses parting the Red Sea. I knew all those stories just from my basic education. But my last year at Florida State, a guy by the name of R.V. Brown had come to Florida State. He was actually a native of Tampa. He’s a pretty big evangelist. He came to meet with me literally every Wednesday my last year at Florida State and I was a born again Christian in November of 2014,” Winston revealed.

After his born again experience, Winston said he finally began to assert his identity in Christ as he continued studying Scripture with Brown.

“And just walking through the word with him and growing a new way. Because I got baptized when I was young. I was baptized when I was 8-9 years old. And then my first year in the NFL, that next year, I got baptized with my now fiancée in Colorado. I’ve been through ups and downs. But one thing about me. I always knew that my identity wasn’t in football. It wasn’t in baseball. I knew it’s always been in Christ and just my upbringing has always led me to have a tremendous faith that God was going to see me through and he would not give me too much that I couldn’t bear. So I’ve always had that solid foundation of who I really was. No matter who my parents were, or no matter who my father was, I knew who was my Savior was and I knew who I was in His Kingdom,” he said.