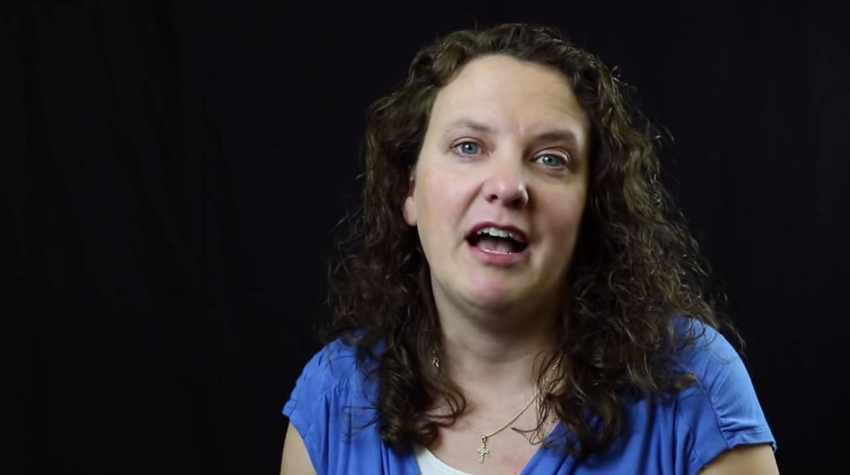 Even though her grandparents are Christians, and her parents are apostates Iowa native and former “evangelical atheist” Kim Endraske says she had no idea “Jesus was God in the flesh” until this happened.

When she was about 21, Kim explains in a testimony first shared at the “Memphis Exalts Jesus” event in Memphis, Tennessee earlier this year that she was so deep in her unbelief she was a sort of disciple of atheism.

“I was a strong evolutionist and now looking back I would have called myself an evangelical atheist. I was trying as hard to convert people to be an atheist as they were to convert me to believe in God. So I ended up taking a student teaching position for my last quarter in college in St. Louis,” she explained

Then she got a call from a friend to attend a wedding and she said yes without realizing that it was the beginning of the interruption of everything in her life.

“And after being in St. Louis for a couple of weeks, I got a phone call out of the blue from a girlfriend. And she said, ‘Hey Kim, I’m getting married and I want you to come,” she said.

“Against all of my better judgement. I went to this wedding and that day I met a young man who was willing to go head to head with me on those debates. He didn’t run away when I was challenging his beliefs and he was willing to spend the hours of conversation that it took for me to…I don’t know. I was very argumentative and a complete debater,” she said.

The young man captivated her with the Gospel she said and for the first time in her life, she discovered what it meant to be “saved.”

“So we kept talking and one night he said something to me about being saved. And honestly, I didn’t know what the word ‘saved’ meant. And so I just said to him what does it mean to be saved? And it was the first time in my life I’d heard the Gospel,” she said holding back tears.

“I was 21 years old. I had grown up in the Midwest. I had Christian grandparents. I had even gone to a Christian college.  And to tell you the truth, I did not know that Jesus was God in the flesh. I didn’t know why we celebrated Easter or Christmas. I didn’t know the famous Bible verse John 3:16 ‘For God so loved the world that he gave his only begotten son that whoever believes in Him should not perish but have everlasting life.’ I didn’t know that famous song ‘Jesus Loves Me,’” she said.

In a later interview she explained that her parents who were, married, moral and faithful to each other had walked away from the church before she was born and wanted nothing to do with Christianity so they never exposed her to the faith.

“I was totally devoid of anything spiritual or religious in my house. My parents never took me to church. They never prayed, with me or in front of me…they never talked about God in any real kind of way,” she said.

She explained that when she was in middle school she asked her parents why they didn’t go to church and they told her why they left the church but said “it had nothing to do with God or Jesus.”

After learning about being “saved” from the young man, Kim decided to do something about it.

“At that point, honestly my life completely changed.  The biggest thing that changed for me was that when I read the Bible, and before, people had shown me things in the Bible and I always thought, this is a fairy tale, I can’t believe people believe this stuff.  And when I read the Bible I thought ‘Wow. This is real,’” she continued. “It had power for me in a way that I had never seen before so I began reading the Bible and seeing the truth that was in the Scripture.”

Kim’s story however doesn’t end there.

“After becoming a follower of Jesus Christ. I continued to meet with this young man. Our conversations changed. They were less of debates and more fruitful conversations about the truth of the Scriptures and he continued to teach me. He gave me my first Bible that I still have and eight months later we were married,” she said.

Good Friday: He was wounded for our transgressions

But he was wounded for our transgressions, he was bruised for our iniquities: the chastisement of our peace was upon him; and with his stripes we are healed. […]

Christian country singer Joey Martin Feek died Friday afternoon after a nearly two year battle with cancer according to her husband, Rory Feek. She was just 40. […]