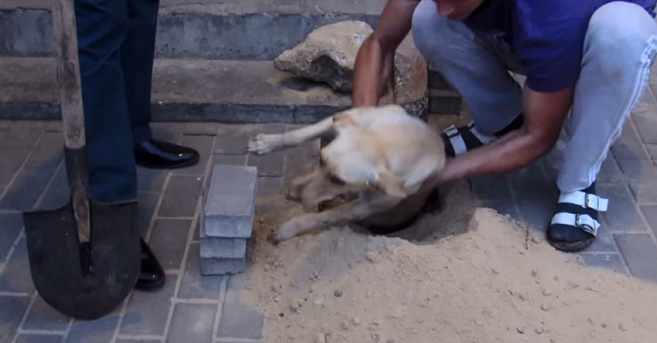 A pregnant stray dog who was buried alive underneath paving stones and managed to survive for two days before it was rescued is now said to be recovering at a shelter in the city of Voronezh, Russia.

A video of the dog’s inspiring rescue posted on YouTube has already been viewed more than half a million times since Thursday when it was first published.

The dog reportedly crawled into a hole in the ground that was created when a pavement collapsed in the city. Workers who were later called in to fix the pavement had no idea the dog had crawled inside and ended up sealing the animal underground.

The trapped dog eventually caught the attention of nearby residents with its barking and howling which prompted a rescue from city officials.

The video shows a man quickly removing the paving stones from the area where the dog was trapped and eventually setting it free.

Watch the heartwarming rescue below.

Ohio Gov. John Kasich, 63, could have completely lost it when a drunk driver killed both his parents in 1987, instead, he says, the tragedy helped him find the Lord. […]