Denise Matthews, the singer, model and actress formerly known as Vanity who toured with music icon Prince before giving it all up for Jesus in the early 1990s to become an evangelist died on Monday in Fremont, California. She was 57.

Her sister Renay Matthews confirmed her death with The New York Times and revealed she died as a result of health problems related to her kidneys. She testified about her kidney problems during a crusade in 1995.

“As I stand here without any kidneys in my body…I have given it up to Christ so much that I am not taking a kidney from another man or another woman. I am waiting on the Lord,” she said at the crusade. “He’s gonna put those kidneys by His hands in my body.”

In an interview with Jet magazine in 1993 Matthews revealed in her very compelling testimony of her conversion that her drug use from her past life almost killed her and she suffered renal failure. She said doctors had given her three days to live but she found the Lord.

“Vanity was dying,” she said. “It was drugs, rock ‘n’ roll, that whole sexual thing. Vanity was praying to die because she was lost and hurting inside. God said you have to go through darkness until you find His light.”

For 15 years she explained, she was the victim of physical and verbal abuse at the hands of her father.

“For 15 years, he beat me badly… that happens in a lot of homes. The Bible says there will come the day when the mother will go against the father and children will stand up and shoot their parents. And it’s happening. Kids are shooting their parents. I wish I could see my father in heaven, but I won’t. He’s in hell,” she said.

This abuse she said, caused her to not think very much of herself but she covered how she felt.

“I always put on a show. I’m a mighty fine actress when it comes to that. I would wear a smile on the outside and come back and cry inside. I would truly hate what I was doing but I was all caught up in it. It’s like someone caught up in a lie who wants to tell the truth. You put this big façade up and you don’t want to give anyone the idea that you’re weak. I finally let it go and gave it to God,” she said. “I said, ‘I am nobody. I need somebody. Please help me.’”

She said she wore the façade when her former boyfriend Prince put her in the lead of the 1980s trio Vanity 6 which he founded.

“Prince created the whole Vanity 6 image. It bothered me at the time. I lied and said it was the image I wanted. I did it because he told me I had to do it. If I didn’t do it, I wouldn’t get paid. I got into it. I wanted the old Diana Ross image,” she said. 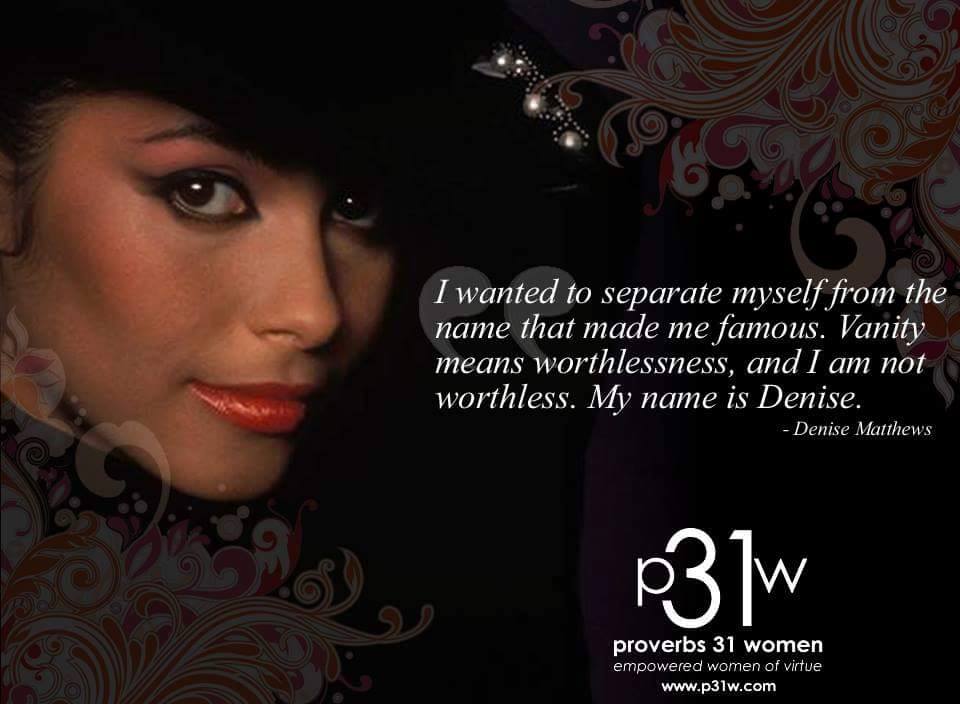 It was while pretending to be someone she didn’t want to be she said, that she got involved in the wild life of Hollywood.

“I did cocaine. I tried men, women, everything. I didn’t snort cocaine, I smoked it.”

She would eventually leave Prince to go off on her own performing in films like “The Last Dragon,” “Action Jackson,” “Never Too Young to Die,” and “52 Pick-Up.”

“Torture was going on in my life and led me to the Lord. For 33 years, I was walking dead. I masked myself in clothes, makeup, anything,” she said.

“I was extremely wild. I found out that if you are not walking with God, the Devil will possess you. I prayed that God would take me because I was afraid of what would happen to my body,” she continued.

“Demons were coming into my bed and sleeping in my bed. Those things will happen if you’re carrying on like I did. I have a strong love for Jesus Christ. He delivered me from anguish, death and sin. I get excited by God. No man shall enter the Kingdom of God unless he is born again. I got rid of all the lingerie and cleaned house,” she explained.

In her final post on Facebook on Feb. 10, just days before she died, she noted: “I want everyone to remember what Jesus has done for me. I wrote a whole biography on the subject. ‘Blame it on Vanity’ My Lord ordained this testimony.”