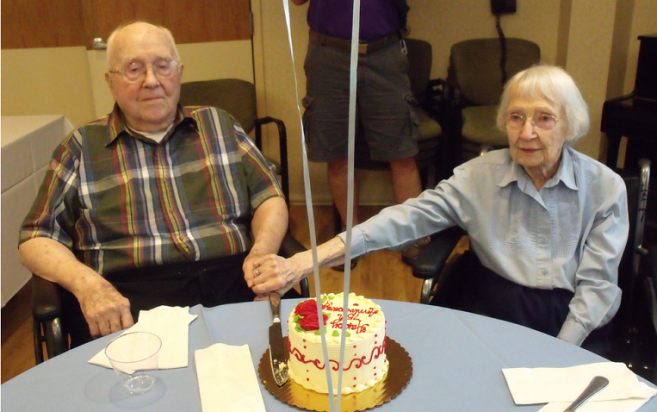 When Walter Kimmel met his wife Lissette at Emmanuel Lutheran Church in Baltimore, Maryland 78 years ago he sang in the choir and she played the organ. On Tuesday, they celebrated their 75th wedding anniversary and they had a party.

The couple who live at the Charlestown Retirement Community in Catonsville, Maryland has been married since Aug. 18, 1940 according to USA Today.

At the time of their courtship says Mel Tansill, a spokesman for the retirement community young men and women did not sit together in church but after Walter made the first move to get his first date with Lissette he never looked back.

“After church one day he came up to her to make their first date,” wrote Tansill. “It was custom for boys to sit on one side of the church and girls on the other.”

And on Tuesday they celebrated the 75 years of marriage with a lively party filled with big band music and a cake from a local bakery.

Walter worked at Baltimore Gas & Electric while Lisette was a secretary. They have two sons, four grandchildren and four great-grandchildren.

WATCH A VIDEO CLIP FROM THEIR CELEBRATION BELOW.