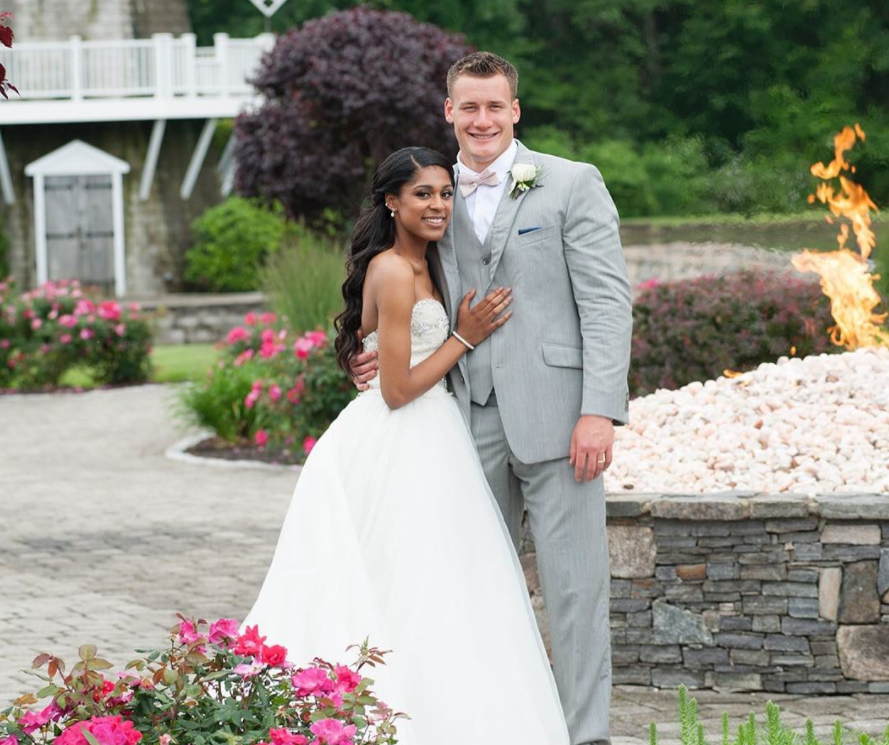 “It was the godly thing to do and it was the responsible thing to do,” Erica DeValve wrote Thursday about what her husband Cleveland Browns tight end Seth DeValve did. Seth she said however, should not be seen as some sort of “white savior.”

“While I understand (and am deeply proud) that Seth is the first white NFL player to kneel during a demonstration like this (on Sept. 4, 2016, Megan Rapinoe, a U.S. women’s soccer player, was the first white professional athlete to do so), I would like to push back against some of the attention he’s been getting that portrays him as some sort of white savior to a movement that was started and has been carried on by black football players for about a year now,” she wrote on Very Smart Brothas Thursday.

“I am grateful for the widespread support and praise that Seth is getting for his actions, but I would like to offer a humble reminder that a man—a black man—literally lost his job for taking a knee, week after week, on his own. Colin Kaepernick bravely took a step and began a movement throughout the NFL, and he suffered a ridiculous amount of hate and threats and ultimately lost his life’s work in the sport he loves,” Erica said.

#Browns TE Seth DeValve said players wanted to use anthem to "pray for our country." pic.twitter.com/3twqsbduaq

That same year, now free agent quarterback Colin Kaepernick began protesting racial inequality and oppression by refusing to stand for the national anthem before NFL games. He became the face of the movement.

Since then, many other NFL players have shown their solidarity by taking a knee and speaking out. None of them however were white until Monday.

Along with 11 other Browns players, Seth took a knee in prayer during the national anthem before the start of the preseason game against the New York Giants and drew much praise from the public for it.

My Brother @SethDevalve knows the power of prayer. Mad love for you pic.twitter.com/QgFy5cBkZ4

“My Brother @SethDevalve knows the power of prayer. Mad love for you,” tweeted defensive tackle for the Los Angeles Chargers Caraun Akinó Reid.

Seth who met Erica while they were both serving in the Princeton Faith & Action, campus ministry and got married just two months ago, said he and his teammates decided to protest in prayer in part because of the deadly riot in Charlottesville, Virginia on Aug. 12. He also took the knee he said, because of how he expects racism to affect his family.

“I myself will be raising children that don’t look like me, and I want to do my part as well to do everything I can to raise them in a better environment than we have right now,” DeValve said. “So I wanted to take the opportunity with my teammates during the anthem to pray for our country and also to draw attention to the fact that we have work to do.”

“It saddens me that in 2017 we have to do something like that,” Seth explained to ESPN. “I personally would like to say that I love this country. I love our national anthem. I’m very grateful to the men and women who have given their lives and give a lot every day to protect this country and serve this country. I want to honor them as much as I can.

“The United States is the greatest country in the world. It is because it provides opportunities to citizens that no other country does. The issue is that it doesn’t provide equal opportunity to everybody.

“I wanted to support my African-American teammates today who wanted to take a knee.”

Erica who recently graduated from Princeton University, will begin pursuing her master’s in theology from Fuller Theological Seminary this fall with a focus on the intersection of race and Christianity in the U.S. according to Very Smart Brothas. Her husband studied mechanical and aerospace engineering at Princeton.

She encouraged Seth’s supporters to treat him as an ally instead of putting him on a pedestal because he took the knee.

“We should not see Seth’s participation as legitimizing this movement. Rather, he chose to be an ally of his black teammates. To center the focus of Monday’s demonstration solely on Seth is to distract from what our real focus should be: listening to the experiences and the voices of the black people who are using their platforms to continue to bring the issue of racism in the U.S. to the forefront. Seth, as a white individual, never has and never will truly have to feel the weight and burden of racial discrimination and racial oppression. No white person does or will. But all white people should care and take a stand against its prevalence in this country,” Erica wrote.

“What I hope to see from this is a shift in the conversation to Seth’s black teammates, who realistically have to carry that burden all the time. I am discouraged by this idea that acknowledging and fighting against racism is a distraction that must be stored away in order to be a good football player. I wholeheartedly reject that narrative,” she said.

Protests continued  Thursday from supporters of Kaepernick who believe  he has been blackballed by the NFL.

Thank you to everyone who went out to support yesterday. It's amazing to see the power of the people continue to grow….