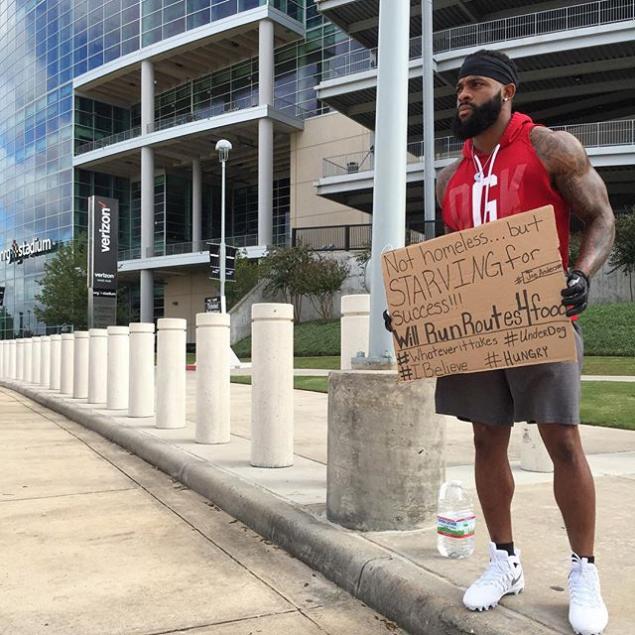 After weeks of holding his faith and a sign hoping to get a shot to play in the NFL again, Christian wide receiver Joe Anderson, 27, has been signed to the practice squad of the New York Jets.

Just six weeks ago Anderson stood outside NRG Stadium in Houston, Texas with a sign campaigning for a shot at a roster spot with the Houston Texans. Even though he didn’t get a workout with the Texans, Anderson held his faith and remained determined.

“I wasn’t out there trying to make no one sorry for me ‘cause I have faith. I believe the word of God. God gives grace to the humble man and that’s why I was out there. Going that extra mile by faith. Knowing how much I work hard,” Anderson told Fox 26 about why he held the sign in November.

The New York Jets’ Brandon Marshall, who played with Anderson in with the Chicago Bears from 2012-13, shared Anderson’s story on Instagram during his campaign to land a spot on the roster of the Texans calling him one of “the hardest working guys” he has ever played with while praising his humility.

“Wow this is humility right here. My brother @_joeanderson is one of the hardest working guys I’ve had the pleasure of playing with. Every day he stands outside of @houstontexans stadium praying someone gives him a shot. Some may call him #crazy. Hell I had to stop and really see his strength in this. I watched this guy grow so much. JOE you’re the kinda of guy I want to play with. You’re the guy I want in my FOXHOLE. I don’t care if it’s covering kicks. #mindovermatter When pride comes, then comes disgrace, but with humility comes wisdom PROVERBS 11:2.”

#NothingWillStopMe Lord it's all in your hands, all I know is that I believe it by faith and see it all happening even when it looks like a joke before the eyes of man! I fill myself with humility and say let your Will be done and use me to allow others to believe in your power!!!! Im not looking at my situation with a worldly mindset and that's what's gonna seperate me my hunger can't be matched my heart can't be compared too, I'm outside the Houston Texans facility every morning, because I kno what type of gift God has blessed me with!!! A lot of people don't really live out the meaning #WhateverItTakes they just sayin it!!! You gotta really live that junk if you say it and believe in yourself and trust in the Lord, and living it don't just mean hold up a sign!! Oh there is much pain behind holding this sign an it's not from bein doubted or the underdog, like how bad do you really want it?? Forget a publicity stunt Boyz is Really HUNGRY out hur dawg to the point if the coach wanna line up I'll route him up too, to the point if it's special teams an the REF get in the way I'll hit him too!! It's something flickering in my head everyday with much Humility and WILL power to go the extra mile when it come to believing in myself and proven all doubters wrongI'm not just chasing greatness for myself/family but for all the people that lack faith and wanna quit and don't believe God still moves, DAWG if you gotta DREAM GO GET THAT!! Let ZERO What If's stand in the way go to the grave on E, not off what someone told you you can't do…Create and tell your testimony don't be ashamed of it, do it all for the glory of the kingdom take yourself outta the picture I'm out here on FAITH, it's bigger than just collecting a check to me straight up! The way I do what I do and why I do what I do isn't just to score touchdowns and gain fame that's far from the case I don't need all that cause I'm already famous in spirit an you can't get no famous than that, when I get my shot you'll see what the Lord is truly about to do in my life and I pray wit all my heart it inspires you to never Give up.When your purpose means more than your situation God will give you favor #TAGandREPOST

On Tuesday, according to the National Football Post Anderson’s faith and hard work paid off when the Jets signed him to their practice squad.

“All I want is a shot to prove myself,” Anderson told the Post in a telephone interview. “I’m hungry, I’m determined and I will do whatever it takes to succeed. I just want a chance. I will never give up. I love this game.”

Anderson has played nine games in his career – all with the Chicago Bears after going undrafted in 2012 according to Fox Sports. He is however yet to record a catch.

“I’m determined to show what I can do,” Anderson told the Post. “I love football and I’m blessed by God to be able to play this game. I can do this, I know it.”

Anderson describes himself on his Instagram account as: “A Man after GOD’s own heart! Be the best sample of Christ you can be, so in the end you can Live! Married With 2 Beautiful Kids!”