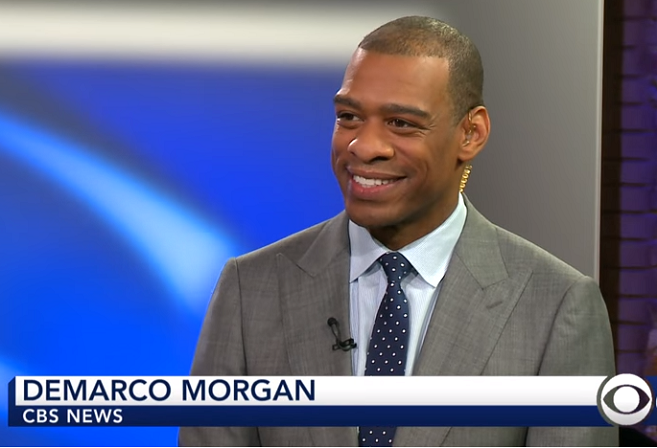 At 36 years old, longtime television journalist Demarco Morgan says he is “fulfilling a dream” with his recent appointment as a correspondent for CBS News in New York City. His journey to his dream however was filled with trials and doubt and it was faith, he says, that kept him going.”

“I am fulfilling a dream,” Morgan told Atlanta’s Saporta Report weeks before he started his new job in November 2015. “I must follow God’s will.  He heard my prayers.”

Morgan who is a graduate of Columbia University Graduate School of Journalism is a familiar face in a number of major media markets. He previously worked as a reporter and co-anchor of WXIA TV in Atlanta as well as a weekend anchor for WNBC TV in New York. He also teaches broadcast writing and reporting at Morehouse College and Clark Atlanta University according to New England One.

In an interview with Black Men’s Dossier last summer however, he explained that at some of the most pivotal points in his quest to become a journalist, he faced obstacles that should have made him quit on the dream he has had since the first grade.

“When I was attending Columbia University, when I first started, there were hundreds of people who applied to get into that school and that year I believe they only accepted 211. I got accepted when I was $26,000 short and I don’t come from a family with money,” Morgan told Black Men’s Dossier.

“I remember calling home and telling my mom I don’t have any money. And the director of financial aid at the time said ‘we have some money to put you back on the plane and send you home but this may not work out for you.’ And I remember crying and crying and crying and it is at that moment my mother said ‘now it is time for you to find God for yourself and know He can do anything.’ And she said, ‘before I get off the phone with you, I want you to pray but I want you to remember these words.’ And she said, ‘when God brings you to a cliff, you’ve got to trust Him fully and let go. And either one or two things will happen, he will catch you when you fall, or He’ll teach you how to fly.’ And from that moment to where I am today, I am still flying,” explained Morgan.

The newsman said he grew up in Tulsa, Oklahoma and his mother raised him alone after his father died when he was just 10 years old on Father’s Day.

“It was tough for me but he was so instrumental in my life it really didn’t have a horrible effect on me. It had a bigger impact on my brother who ended up going off and selling drugs, being locked up. In and out of gangs, just a whole horrible story…because he was much older,” said Morgan.

His mother he said was able to shield him from the negative impact of his father’s death because he was younger.

He said he went to Booker T. Washington High School where he graduated at the bottom of his class and failed English in his senior year. His English teacher he said, advised him that he would be better off finding something to do with his hands because “in order to be on TV, you have to know how to write well and speak well and you can’t.”

“That almost crippled me and broke my spirit, I remember not telling my mom because anybody who knows anything about a black mom, you don’t mess with her child,” said Morgan.

He said he applied to about nine or ten different colleges and universities at the end of his high school education but was rejected by all of them except one – Jackson State University in Mississippi. And that is where he did undergraduate studies.

Morgan excelled at Jackson state and after he graduated and later got accepted to attend the prestigious Columbia University Graduate School of Journalism in New York City which for him was almost an impossibility.

“It was not supposed to be my story,” he said.

He was later invited back to his high school to be commencement speaker where he came face to face with the English teacher who had discouraged him from chasing his dream.

“I know for a fact that I am not supposed to be doing what I’m doing but it’s by the grace of God that I am where I am and I don’t take it lightly and because of that, throughout my entire life, my entire career, my mother has always said ‘to whom much is given, much is required.’ We all know that verse in the Bible,” he said.

Morgan says he teaches because it is a way of giving back. He gets the opportunity to connect with students to teach them things beyond academics such as workplace politics which can be difficult to navigate.

He says at most television stations “you are always tested and challenged, just to see if you fit, if you belong.”

“Most of my life that has been my story. Does he belong? Does he deserve to be where he is? I’ve had a number of challenges. Everything from wanting to anchor when I never had the opportunity to do so. Wanting to write and tell these compelling stories that sometimes feel limited because somebody has more seniority than you do.

“I’ve had obstacles where I’ve been passed up on opportunities where I felt like I deserved to go and at those moments I knew that was a time when I did want to quit,” he said.

“I think people, especially in our community, we don’t share that we are going through, that we’re having suicidal thoughts that we are wanting to give up, that there is some stage of depression because it’s embarrassing. You don’t want to feel vulnerable,” he continued.

“That was years ago, that was a one-time thing. Like I said I wasn’t gonna do nothing. I just had those thoughts. I am very grateful that happened to me. Sometimes you need to go through just to know whose you are and who you are,” he said.